Grand Master of the Jedi Order

"Destroy the Sith, we must." -Yoda's first line when entering the game.

Yoda is one of the Fun Pack characters in LEGO Dimensions 2: The Rise of Enoch, from the Star Wars franchise.

Yoda was a Jedi Master and leading member of the Jedi High Council for centuries. Later on he would become a Grand Master. In his time, Yoda had a hand in training a large number of Jedi to some extent, including Count Dooku, Mace Windu, Kit Fisto, and Luke Skywalker. Yoda participated in many battles during the Clone Wars, including the first battle on Geonosis, where he rescued the remaining Jedi in the Geonosis Arena along with several Clone Troopers in Republic Gunships. He then confronted his former Apprentice Count Dooku, now a Sith Lord, in a lightsaber duel after Jedi Anakin Skywalker and Obi-Wan Kenobi failed to defeat him themselves.

Towards the end of the Clone Wars, Yoda was fighting alongside the Wookiees on Kashyyyk, when Order 66 was given out to all Clone Troopers by Chancellor Palpatine, ordering them to eliminate any Jedi they saw. Yoda escaped from the planet with the help of the Wookiees, including Chewbacca, and made his way to Coruscant. On the way, he met up with Obi-Wan Kenobi who had also managed to escape, and they proceeded to the Jedi Temple. They discovered that the Jedi there had been massacred, and that it was Obi-Wan's former Apprentice Anakin Skywalker, now known as the Sith Lord Darth Vader, who had led the assault. Yoda ordered Obi-Wan to confront Vader while he attempted to neutralize Palpatine, the new Emperor of the Galactic Empire. Yoda then made his way to Palpatine's office, knocking out his Royal Guards on the way. He initiated a duel with the Sith lord, but was unable to defeat his evil adversary, and had to go into hiding to survive. Yoda found his way to the remote planet of Dagobah, where he stayed in isolation for many years during the Empire's reign.

Three years after the events of the battle of Yavin, a Jedi-in-training named Luke Skywalker along with his droid R2-D2 crash-landed on Dagobah in an X-wing, after Luke received a message from his now-deceased Master, Obi-Wan Kenobi, telling him to seek out the only other Jedi left in the galaxy. Luke and R2 eventually came to find Yoda, and Luke underwent some Jedi training from him in the ways of the Force. It was during this training that Luke had a vision of his friends in pain in a city of clouds, and set off in an attempt to rescue them, despite Yoda urging him to remain on Dagobah and to complete his training.

One year later, Luke returned to Dagobah to complete his training. However, in this time Yoda had grown sick, and knew that death was upon him. He informed Luke that his training was complete, and confirmed that Darth Vader was truly Luke's father. Close to death, Yoda revealed that there was another Skywalker, Luke's sister, Princess Leia. At the age of 900, Yoda died, becoming one with the Force along with Obi-Wan Kenobi.

During the celebration on Endor after the second Death Star was destroyed and the last two Sith were killed, Luke saw the spirits of Obi-Wan, Yoda, and his now deceased, but redeemed father, Anakin Skywalker. 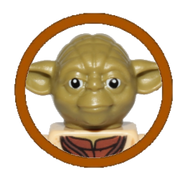 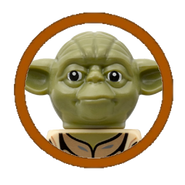