Member of the Justice League

Wonder Woman is one of the Story Pack characters in LEGO Dimensions 2: The Rise of Enoch, from the DC Extended Universe franchise.

Princess Diana of Themyscira is an Amazon warrior princess and one of the world's first superheroes, known as Wonder Woman. She is the daughter of Queen Hippolyta and Zeus, the king of the Olympians.

Born on Themyscira, Diana was raised in paradise, hearing tales of the Amazons’ great task of defeating the corrupt God of War, Ares, ushering in a new era of peace to the world. Upon coming of age, Diana began pursuing the life of a warrior, despite her mother's objections. Determined to serve, she ultimately enticed her aunt Antiope to train her in secret. This, however, was soon discovered by her mother. Begrudgingly, the queen accepted Diana as a warrior, and ordered Antiope to train her better than any other Amazon.

After a training session, Diana happened to come across Captain Steve Trevor during his escape from the Imperial German Army in the ongoing Great War. A battle soon followed, as the Germans tracked Trevor to Themyscira, where they invaded in pursuit of Doctor Poison's notes. The loss of Antiope and subsequent realization of Mankind's downfall during the absence of the Amazons convinced Diana to join the war effort, recognizing Ares as the instigator of the conflict. In the following days, Diana soon uncovered Ares, who exposed her to be the God Killer, having been originally conceived to be the ultimate weapon against her brother. Following this revelation, a fierce battle ensued, where Diana fulfilled her purpose in freeing mankind from Ares' influence. The loss of Steve in World War I and the loss of her other friends sometime after 1918 had left Diana broken-hearted & isolated but she vowed to protect humanity whenever she was needed due to her very compassionated nature over the years after 1918 but in the shadows as a mysterious female savior which people are curious about on who she is. She also gained more knowledge on the world plus she changed residence over the years to keep herself guarded while landing jobs at museums like the Smithsonian Museum in Washington DC in 1984.

In modern times, Diana operates as the curator of the Louvre Museum as Diana Prince. Two years following the Battle of Metropolis, Diana came into conflict with Lex Luthor, who discovered a photograph of Diana and the Wonder Men during his search for metahumans. During her pursuit of Luthor, Diana crossed paths with Bruce Wayne, who discovered her secret after their confrontation during his search for the White Portuguese. Later, along with the photograph on Luthor's files Bruce sent her, Diana discovered the evidence of metahumans in the world. With her mission fulfilled, Diana prepared to depart back to London, but the emergence of the monstrous Doomsday led Diana to ally herself with Superman and Batman to take down the monster in a fierce battle that ended with the tragic death of Superman. Afterwards, in the wake of Clark's funeral, Diana and Bruce decided to create a team to battle any future threats to the world.

As the world mourned for the Man of Steel, Diana combatted the rise of radicals who saw Superman's death as an omen and capitalized on the world's vulnerability. Shortly after the team assembled, Wonder Woman assisted in helping a newly resurrected Superman regain his memories. With the team now fully assembled, Wonder Woman contributed to the successful offensive against Steppenwolf, forcing the alien invasion into retreat. Afterwards, she began to plan for the Justice League's future alongside Bruce Wayne. 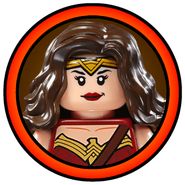