Sword, Shield and the Lasso of Truth

"I am Diana of Themyscira. None shall stand in my way."

"The hopes of the world are depending on me. I cannot fail!"

Wonder Woman is one of the Fun Pack characters in LEGO Dimensions 2: The Rise of Enoch, from the DC Comics franchise.

Diana Prince is an Amazon from the island of Themyscira and her mother, Hippolyta, is their queen. As a baby, Diana was blessed with abilities by Greek goddesses and Hermes (the only god who blessed her). A contest was held to search for a woman to see who would help "Man's World". Diana won and left Themyscira to use her abilities to help people in "Man's world" as the super heroine Wonder Woman. Wonder Woman is also a member of the Justice League which also includes other super heroes such as Superman, Batman, Green Lantern, The Flash, Cyborg, Aquaman, Martian Manhunter, and occasionally Batgirl, Nightwing, Huntress, Zatanna, Hawkman, Hawkgirl and Shazam!. Wonder Woman occasionally helps out the Birds of Prey, a team of female superheroes.

Wonder Woman's love interests include Batman, Steve Trevor and Superman but she has shown attraction to The Flash.

Wonder Woman plays a bigger role than in the last game. In this level Wonder Woman, and other members of the Justice League, are held hostage by the Legion of Doom and the Armies of Darkness. She, along with the heroes, are forced to watch Superman die by the emitting radiation from the Gold Kryptonite. Andy and his friends then rescued the heroes and help them fight the Legion of Doom, the Parademon army, and the Armies of Darkness but the newly recruited Doomsday arrives to confront the heroes. As the battle progresses, Wonder Woman gets knocked unconscious by the monster and is later seen being carried in Batman's arms as he and the rest of the Justice League retreat to Vorton.

"I'd love to stay and fight, but I'm needed elsewhere."

"Go on without me for now."

"My world as it stands now. I hope I can save it."

"Sisterhood is stronger than anything."

"I must fight for my people and all humankind."

"You leave me no choice but to fight!"

-Wonder Woman's line when in combat.

"Go to Hades and take your servants with you!"

"My gift shall allow me to make sure a work of this."

-Wonder Woman's line when about to solve a puzzle.

"There is little I cannot deal with, including this."

-Wonder Woman's line when unable to solve a puzzle.

"It will take someone with abilities different from my own to use this."

-Wonder Woman's second line when unable to solve a puzzle.

"This was not part of my Amazonian training."

-Wonder Woman's third line when unable to solve a puzzle.

"Interesting. The world is full of such amazing, undiscovered treasures."

"Oh, my. It's wonderful... Whoever made this should be very proud."

"What is this? Looks like something Superman would change outfits in!"

-Wonder Woman when entering the TARDIS.

"I'm not sure what good this will do but it looks kind of fun."

-Wonder Woman when entering the Gyrosphere.

"I shall take this extra power and use it only for good!"

-Wonder Woman when upgrading a vehicle/gadget.

"For Themyscira and the Amazons!"

"Remember, your strength is a gift. Use it wisely."

-Wonder Woman seeing a giant character or when entering a mech.

"You know, we never did get to finish our dance."

"What, Link? Am I so beautiful that you've no words left?"

-Wonder Woman to The Joker.

"I have wrestled with gods."

"Hey, Harry. If Superman ever gone rogue, you and your magic would be useful."

"That Venom's gone to your head."

"Go back to your universe."

-Wonder Woman to the Demogorgon.

"Hey, Homer. Someone told me you were a fine of mine?"

"No, these are my bracelets. Not your 'Precious'. Whatever that is!"

"Always a pleasure to meet another proud female warrior."

"You come from a proud people, Laval. I wish you well."

"Still up to your old tricks, Harley? Why don't you join me in sisterhood?"

"It's like a mirror image come to life! Gotta say, the Tiara's looking pretty good!" 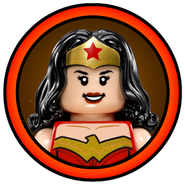 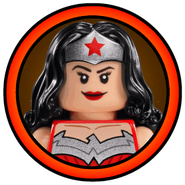