Wario is one of the Fun Pack characters in LEGO Dimensions 2: The Rise of Enoch, from the Super Mario franchise.

Wario (ワリオ Wario?) is a character in the Mario series. He is the counterpart of Mario and is known to be very greedy. Although he began as an antagonist, he developed into more of an anti-hero, starring in his own spin-off titles such as Wario Land. 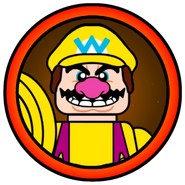