Wallace is one of the Team Pack characters in LEGO Dimensions 2: The Rise of Enoch, from the Wallace & Gromit franchise.

Wallace is an inventor, the main protagonist and half of the title duo of Wallace & Gromit. He is also the owner and best friend of Gromit.

He delights in creating elaborate contraptions that often don't work as intended. He is a self-proclaimed genius, evident from his exclamation when he discovers Hutch's borrowed skill, a talent for all things mechanical. Most of Wallace's inventions look not unlike the designs of Heath Robinson and Rube Goldberg; creator Nick Park has said of Wallace that all his inventions are designed around the principle of "using a sledgehammer to crack a nut". He is also very eccentric and funny, and is always willing to provide a good laugh or listen to one himself.

He also likes crackers, describing them as "cracking". He also likes tea in the afternoon and is shown to have a liking to toast for breakfast; he describes toast in The Wrong Trousers as "cracking" as well. The thought of Lancashire hotpot keeps him going in a crisis. He enjoys a nice cup of tea or a drop of Bordeaux red for those special occasions. He reads the Morning Post, the Afternoon Post and the Evening Post and occasionally Ay-Up!, which is a parody of Hello! magazine.

Some of Wallace's contraptions actually are based on a real-life invention. For example, Wallace's method of getting up in the morning incorporates a bed that tips over to wake up its owner, an invention that was exhibited at the Great Exhibition of 1851 by Theophilus Carter, and is similar to a device sold in Japan that is used to ensure a certain wake-up time. The jelly-toast contraption that gives him breakfast in the morning also bears a similarity to a Rube Goldberg-type machine, with the ability to do more than one thing at the same time. His versatile nature and inventor abilities have caused him to be hired for a wide variety of jobs. In A Close Shave, he was a window cleaner along with Gromit. In The Curse of the Were-Rabbit, he was a pest controller, and in A Matter of Loaf and Death, he was a baker.

"One for the album!"

-Wallace's line when in Photo Mode. 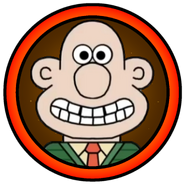