Leader of the Five

"Good afternoon. May I help you?"

-Victor Batrachian's line upon approaching him.

"Is there something I can do for you?"

Victor Batrachian is one of the non-playable characters in LEGO Dimensions 2: The Rise of Enoch, from the Shadow Man franchise.

Born in Geneva, Switzerland, the son of a wealthy Swiss banker. A brilliant student, Batrachian graduated from Cambridge University in 1985 with a Ph.D. in Forensic Psychiatry. Batrachian spent the following four years at the London Medical School training to become a General Practitioner (MD). Was expelled from the school without completing course. Emigrated to US in early 1991, using forged certificates to gain a Green Card. Established medical practice in Boston. Was indicated on five accounts of murder following the discovery of an insurance fraud involving five of his patients, all wealthy widows who had willed him their entire fortunes and were subsequently found dead of "natural causes." Batrachian, as their doctor, had signed all five death certificates. Captured by State Police, as he was about to cross the state line into Indiana. Batrachian absconded from the Butler Country Sheriff's Office after killing two deputies and wounding a third. At this point (December, 1995), Batrachian appeared on the FBI's Most Wanted List. In December '95, a handwritten letter with an Abilene postmark arrived at the office of the Dallas Morning News. In it, the writer intimated -- somewhat obscurely -- that they intended to commit several "bloody sacrifices." The writer of the letter has since been identified as Batrachian. In January, 1996, the corpse of an unidentified young man was discovered in a derelict boathouse on the shores of Lake Fore Phantom Hill, Texas. Forensic examination showed that the head of the corpse had quite literally exploded -- as through some "great and unnatural internal pressure." A strange symbol had been branded on to the left side of the victim's chest. Over the next year and a half, twelve more murders followed, all with the same modus operandi. FBI agents captured Batrachian in August 1997. He was subsequently convicted of fifteen accounts of first degree murder and sentenced to die in the electric chair. He is currently on death row at Gardelle Country Penitentiary, awaiting the result of his second appeal and achieving a certain notoriety in artistic circles with what he calls his "Asylum Installations" and his "Schismata" paintings.

Dear Sir, I have brought HIS Kingdom to Earth and a bloody cleansing is nigh. Indeed, it is well overdue. I am the Leader of the FIVE -- the Watchers of the GATE OF SOULS. We shall Make the Way for the coming of HIS GLORIOUS ARMY and as a fanfare -- we demand several sacrifices. Blood Sacrifices for HIS pleasure. So be aware then, that the road to your GOLGOTHA shall be slippery with your BLOOD.

FOR WE ARE MANY

I remain, as ever, disrespectfully yours,

UPDATE -- News story from the front page of Clearford Chronicles, dated one week ago.

Mass-killer Doctor Victor Batrachian is the mastermind behind the three-day-old siege at Gardelle County Penitentiary.

Batrachian, who has been on death row for the past two years, convicted in 1996 for the murder of fifteen people, has become something of a celebrity in artistic circles with his "Schismata" paintings and what he terms his "Asylum Installations". Details are sketchy, but it appears that last Thursday evening, Batrachian was momentarily left alone in the prison's Art Studio. When the guards returned, he was nowhere to be found. After killing four guards and a trustee, Batrachian managed to override the security systems, releasing three hundred prisoners from their cells. The condition of the twenty-five hostages is unknown. Gardelle Penitentiary is currently surrounded by 150 National Guardsmen, but as of yet they have not been given the order to go in.

The Lizard King shall lead The Five,

From out of the Southern gaol shall cut HIS bloody swathe,

In HIM the darkness stands revealed,

HIS eyes are void as a dead man's gaze,

As cold as the light of a dying star.

FOR WE ARE MANY.

"The End is sooner than you think!"

"For I shall sit at the right hand of the Lord!" 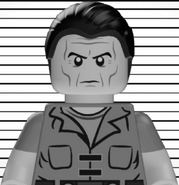