LEGO Dimensions Customs Community
Register
Don't have an account?
Sign In
Advertisement
in: Customs by CJDM1999, Custom Characters by CJDM1999, Disney,
and 17 more

Ursula is one of the Blind Bag characters in LEGO Dimensions 2: The Rise of Enoch, from the Disney franchise.

Ursula was a sea witch who agreed to turn the mermaid Ariel into a human in exchange for her voice. To remain human, Ariel had to get true love's kiss from Eric in less than three days, but Ursula cheated to ensure that Ariel never got the kiss, so she took her back to the sea and negotiated her freedom with King Triton in exchange for his powerful trident. After getting the power of the trident, Ursula tried to kill Ariel and Eric, which became her undoing as Eric crashed an ancient ship against Ursula, killing her. 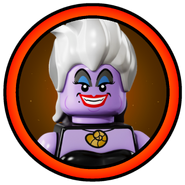