The Undertaker is one of the Blind Bag characters in LEGO Dimensions 2: The Rise of Enoch, from the WWE franchise.

Mark William Calaway (March 24, 1965), better known by his ring name The Undertaker (sometimes simply Taker), is an American professional wrestler signed with World Wrestling Entertainment (WWE). He is the company's most tenured performer, and is the only remaining active competitor from the very first episode of WWE Raw in 1993. Calaway began his wrestling career with World Class Championship Wrestling (WCCW) in 1984. He joined World Championship Wrestling (WCW) as "Mean" Mark Callous in 1989. When WCW did not renew Calaway's contract in 1990, Calaway signed with the World Wrestling Federation. After debuting as Kane the Undertaker, the name was shortened to The Undertaker and he has remained with the company since.

The Undertaker has two contrasting personas: The Deadman, an undead, occult-like figure, which has consisted of many different versions, beginning with the Western mortician character in November 1990 and ending with the satanic Ministry of Darkness leader in September 1999 before returning to The Deadman in March 2004 as a hybrid of all his previous incarnations. His other persona is Big Evil, a biker which ran from May 2000 to November 2003. Because of his gimmicks, Undertaker has a number of specialty matches associated with him: the Casket match, the Buried Alive match, the Hell in a Cell and the Last Ride match. An important part of the character is his half-brother Kane, who was introduced in October 1997 and with whom he has both feuded and teamed as the Brothers of Destruction.

The Undertaker had an undefeated streak at WrestleMania of 21-0 before losing to Brock Lesnar at WrestleMania 30. Among other accolades, Calaway is an eight-time World Champion having won the WWF/E Championship four-times, the World Heavyweight Champion three-times, as well as the USWA Unified World Heavyweight Championship one-time under the Master of Pain character. The Undertaker is also a seven-time World Tag Team champion: a six-time WWF Tag Team Champion and one-time WCW Tag Team Champion. The Undertaker was the winner of the 2007 Royal Rumble and became the first man to enter the annual event last and win. Calaway is also the only current WWE wrestler to have appeared on the first episode of its Raw program. The Undertaker retired from wrestling in November 2020, thirty years to the day after he made his debut for WWE. 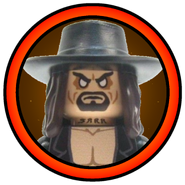