Thanos is one of the Fun Pack characters in LEGO Dimensions 2: The Rise of Enoch, from the Marvel Comics franchise.

Thanos was a member of the Eternals, a race of superpowered beings that descended from a caste of humans genetically enhanced by the Celestials. Thanos himself was the son of Mentor, the leader of an Eternal colony on Saturn's moon of Titan. Much of Thanos' villainous motivations in the comics revolve around his romantic feelings for the entity Death. He later became the master of the Infinity Gauntlet, which he used to murder half of the universe's inhabitants in an attempt to impress Death. He is one of the Avengers' most historical foes, but when he took a break from being a conqueror, Thanos was entrusted with the Reality Stone of the Infinity Stones. 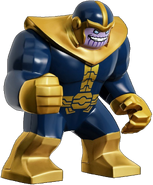