Newspaper Journalist for the Daily Planet

"Anyone need some help? That's why I'm here!"

"Look! Coming out of the rift! It's me, Superman!"

Superman is a playable character in LEGO Dimensions: The Multiverse Curse, from the DC Comics franchise.

Born on the planet Krypton to scientist Jor-El and his wife Lara-El, Kal-El was sent to the planet Earth, Jor-El's only attempt to save his son during Krypton's destruction. Adopted by Jonathan Kent and Martha Kent, and renamed Clark Kent, he grew up in the town of Smallville, and would later learn of his Kryptonian powers and ancestry and become Superman, the Man of Steel. Superman's archenemy is Lex Luthor, who is jealous of Superman and wants to destroy him and look like a hero for doing it. Other enemies of Superman are Bizarro, Brainiac, and General Zod. The Man of Steel also partners with Supergirl, his cousin; Superboy, his clone; and Lois Lane, a reporter Superman is romantically interested in. Superman also works with Batman and Wonder Woman occasionally. He and Batman often, if not always, mistrust each other and don't always get along very well, but Superman has shown attraction to Wonder Woman.

He is a member of the Justice League, which also consists of Batman, The Flash, Green Lantern, Wonder Woman, Cyborg, Aquaman, Martian Manhunter, and sometimes Nightwing, Batgirl, Huntress, Hawkman and Shazam.

"Time to make a super exit!"

- Superman when about to solve a puzzle.

- Superman when unable to solve a puzzle.

"I'd better not let this fall into the wrong hands!"

- Superman when obtaining a collectable.

"Let's settle this rivalry once and for all! Coffee or tea?"

- Superman when seeing The Doctor.

"So, you were captured by an evil computer? Yeah, I've been there!"

"Careful with that axe, citizen. The Medieval Fair must be in town."

"An island full of dinosaurs? Was I there? I'm pretty sure there wasn't a theme park!"

"I'll be keeping my eye on you, Luthor."

"Raiden? Why are you here? Has Dark Kahn returned?"

"I admire your bravery, young man. Keep it up and you could make a great hero!"

"What a delightful vehicle. Cheerful and understated. Just like me!"

"The man of steel covered in steel! What a fitting combination!"

- Superman when riding the Cyber-Guard.

"I hope Bruce doesn't mind if I borrow this for a moment."

- Superman when riding the Batmobile or Batwing.

"I fought someone your size once before, but, it didn't exactly go so well."

- Superman when seeing a big character or riding a mech. 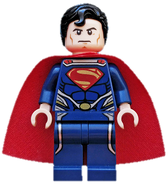 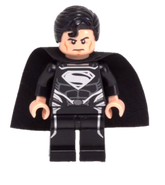 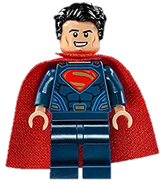