Newspaper Journalist for the Daily Planet (as Clark Kent)

Leader of the Regime (Knightmare)

Superman is one of the Blind Bag characters in LEGO Dimensions 2: The Rise of Enoch, from the DC Extended Universe franchise.

Clark Joseph Kent (born Kal-El) is a super powerful and nigh-indestructible Kryptonian, a superhero of the House of El, one of the extremely few survivors of the destruction of the planet Krypton, and an investigative reporter of the Daily Planet alongside his lover and confidant Lois Lane. In addition, Kal-El is the first Kryptonian of natural birth in centuries, the host of the Growth Codex, and a member of the Justice League.

When Kal-El's father, Jor-El, realized that Krypton was doomed to be destroyed, he and his wife Lara sent their son to Earth, where he would be found by farmers Jonathan and Martha Kent in Smallville and is taken in with them giving the infant the name "Clark Kent". Using his maturing superpowers, he defends the people of Earth from various threats, such as the terraforming attempt by the Kryptonian warlord General Dru-Zod and his group the Sword of Rao, using the alias Superman.

A year and a half later, after thwarting various criminals throughout Metropolis and around the world, Superman grew increasingly wary of the violent vigilante Batman and was ultimately forced into a fight with the Dark Knight by a new and greater enemy, the malevolent supergenius Lex Luthor. However, the two of them ultimately settled their differences in the end and team up with fellow hero Wonder Woman, with the three of them managing to take down the unleashed Kryptonian monster Doomsday together, though Superman was notably killed in the process delivering the killing blow.

Earth's greatest hero was honorably buried in Heroes Park, with the entire world mourning his passing, and his heroically noble sacrifice inspired both Batman and Wonder Woman to begin establishing the valiant Justice League in order to battle any future threats to the world in his memory.

A year following Superman's death, Batman would employ the Flash and Cyborg to revive him with the power of a Mother Box. With the team now fully assembled, Superman greatly contributed to the successful offensive against the New God Steppenwolf, forcing the latter's attempted invasion into retreat. Afterward, Superman officially joined the Justice League and subsequently returned to his life of superheroism and journalism, now unanimously accepted by the world.

Sometime afterwards, he befriended Billy Batson and Freddy Freeman, even agreeing to eat lunch with them at their school, and later survived a further attempt on his life by the assassin Bloodsport. 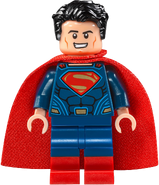