Reporter of the Daily Bugle

"The fight for truth and justice continues!"

"Anyone need some help? That's why I'm here."

Superman is one of the Fun Pack characters in LEGO Dimensions 2: The Rise of Enoch, from the DC Comics franchise.

Born on the planet Krypton to scientist Jor-El and his wife Lara-El, Kal-El was sent to the planet Earth, Jor-El's only attempt to save his son during Krypton's destruction. Adopted by Jonathan Kent and Martha Kent, and renamed Clark Kent, he grew up in the town of Smallville, and would later learn of his Kryptonian powers and ancestry and become Superman, the Man of Steel. Superman's archenemy is Lex Luthor, who is jealous of Superman and wants to destroy him and look like a hero for doing it. Other enemies of Superman are Bizarro, Brainiac, and General Zod. The Man of Steel also partners with Supergirl, his cousin; Superboy, his clone; and Lois Lane, a reporter Superman is romantically interested in. Superman also works with Batman and Wonder Woman occasionally. He and Batman often, if not always, mistrust each other and don't always get along very well, but Superman has shown attraction to Wonder Woman.

He is a member of the Justice League, which also consists of Batman, The Flash, Green Lantern, Wonder Woman, Cyborg, Aquaman, Martian Manhunter, and sometimes Nightwing, Batgirl, Huntress, Hawkman, and Shazam!.

He was spotted flying around Metropolis when he saw Batman, Gandalf, and Wyldstyle briefly, before being sucked into the vortex, and is possibly held prisoner by Lord Vortech.

He is seen helping the player proceed by being summoned from the Locate Keystone. 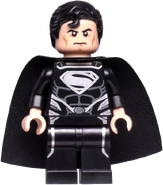 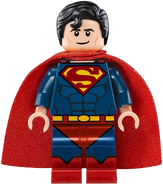 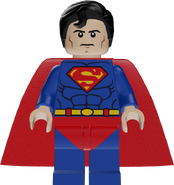 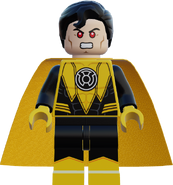 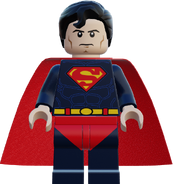