Supergirl is one of the Story Pack characters in LEGO Dimensions 2: The Rise of Enoch, from the DC Comics franchise.

Kara Zor-El is Superman's teenage cousin who was sent to Earth at the same time as baby Kal-El to watch over him and help raise him. However, she was cryogenically frozen in space and didn't age. Years later, when Kal-El was now an adult and a superhero using the name Superman, Kara landed on Earth, still a teenager. She gained powers from living under "a yellow sun" and became her cousin's partner, Supergirl.

Unlike Superman and Batman who do not get along, Supergirl is close friends with Batgirl. 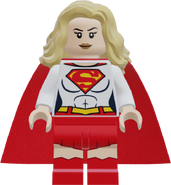 The Rise of Enoch Outfit
Community content is available under CC-BY-SA unless otherwise noted.
Advertisement