Fry cook at the Krusty Krab

Creator and short-term owner of the Pretty Patties Store (formerly)

Manager of The Krusty Krab (temporarily)

Owner and founder of the Flabby Patty Shack (formerly)

Manager of The Krusty Krab 2

SpongeBob lives in a pineapple under the sea. Eternally cheerful and optimistic, he constantly gets on the nerves of his egotistical and depressing next-door neighbor, Squidward. They both work at the Krusty Krab for the miserly, manipulative Mr. Krabs. SpongeBob's best friends are Patrick Star, a dopey, overweight starfish, and Sandy Cheeks, a spunky Texan "land squirrel" who lives in an air-filled glass dome just outside of SpongeBob's home town of Bikini Bottom. Frequent themes in the show include SpongeBob's never-ending efforts to get his boating license, and various devious attempts by Mr. Krabs' arch-nemesis, Plankton, to steal the recipe for the popular Krabby Patty. 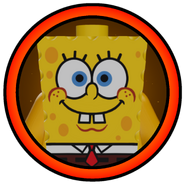