"Fastest thing alive, at your service!"

—Sonic's line when entering the game.

"Oh yeah! This is happenin'. Hmm, that sounded better in my head."

"Alright, time for a little speed!"

Sonic the Hedgehog is a 15-year-old anthropomorphic blue hedgehog and the fastest thing alive. He has constantly gone through islands such as South Island, Westside Island, and Angel Island to save them from the mad scientist, Dr. Ivo "Eggman" Robotnik. He would later find himself fighting nearly god-like beings known as Chaos, Dark Gaia, the Time Eater, and the Deadly Six. He is the leader of Team Sonic which is a trio of heroes including his best friend Miles "Tails" Prower and close friend Knuckles the Echidna who frequently team up to fight against Eggman. He has many other friends including characters such as Tails, Amy Rose, Knuckles, Silver the Hedgehog, Blaze the Cat, and Cream the Rabbit. He has also formed rivalries with Metal Sonic, Shadow the Hedgehog, and Jet the Hawk. Upon collecting the 7 Chaos Emeralds, he can transform into the mighty gold Super Sonic.

Sonic was briefly seen going around the Green Hill Zone retrieving a Chaos Emerald for Tails. As soon as he arrived at Tails' Lab, he discovers Tails, Big the Cat, Knuckles, Amy and Shadow were captured by Doctor Eggman, who then stole the other 6 Chaos Emeralds. As Eggman was influenced by Sonic's compliment, he was distracted, then, quickly, Sonic freed his friends. However, despite Doctor Eggman's mistake of activating the Keystone (which led his friends--minus Tails--, Eggman himself and the other remaining Chaos Emeralds sucked into portals), Sonic then asked Tails for a plan and went to different areas in his world to claim back the other Emeralds and find his other friends. After claiming back all of the Emeralds and successfully defeated Doctor Eggman and Chaos, Sonic and Tails went to a portal, to rescue Amy. This leaves their fate unknown.

Sonic makes his return in this level as the titular main protagonist.

"Woah! Where am I? A Special Stage? Where are the rings? There's usually rings!"

—Sonic's line in the vortex.

"Can't this thing go any faster?"

—Sonic's second line in the vortex.

"Ok! Let's get this party started!"

—Sonic's line when in combat.

—Sonic's line when encountering a boss.

"You better pick up the pace if you wanna beat me!"

—Sonic's line when unable to solve a puzzle.

"Where's Tails when you need him?"

—Sonic's second line when unable to solve a puzzle.

"Lumpy Space Princess, huh? Last time I met a princess I... We... You know, I don't quite remember. Nevermind!"

"Hey. Vampire Lady. Did I hear that you turn into a wolf sometimes? I sure know that feeling..."

"Shaving off your moustache and putting on a white shirt won't fool me, Eggman. I still know it's you!"

"Hey, you're THE Doctor, right? I heard you named a screwdriver after me! How cool is that?!"

—Sonic to The Doctor.

"So you're into collecting rings too, huh? Yeah, they're pretty precious."

"Whoa! What happened to you, buddy? Did Eggman roboticize you or something?"

"Hey a Ghostbuster! I saw this creepy doll that looks like my friend 'Tails'. Think you could take a look?"

"Sometimes you gotta draw a line in the sand, man. You gotta ask yourself, 'what am I willing to put up with today?!'"

—Sonic when seeing the Game Grumps.

"I'll make you eat those words!"

—Sonic when riding the Sonic Speedster.

"Why can't I hold all these rings?"

—Sonic's when obtaining a collectible.

—Sonic when seeing a Big Figure or when riding a mech.

"Man. I can really feel the sunshine. It's brightening up my day!"

—Sonic in the Sonic the Hedgehog World.

"Another thing to slow me down! Are you kidding me?

—Sonic's line when figuring out a puzzle.

—Sonic's second line when figuring out a puzzle.

"A puzzle? This isn't gonna be like the bouncing barrel from Carnival Night Zone is it?

—Sonic's third line when figuring out a puzzle.

—Sonic's fourth line when figuring out a puzzle.

"This should be a piece of cake!"

—Sonic's fifth line when figuring out a puzzle.

—Sonic's sixth line when figuring out a puzzle.

—Sonic's line when leaving the game. 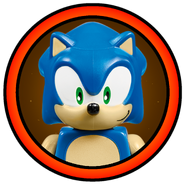 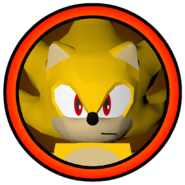