God help us All

Sonic Dimensions 2 is a playable bonus level in LEGO Dimensions 2: The Rise of Enoch, upon purchasing the Sonic and Tails Fun Packs or a Blind Bag containing Knuckles or Amy Rose. It was released on June 23, 2021, to celebrate thirty years of the first Sonic game. It is a non-canon sequel to it's predecessor Sonic Dimensions.

Amy Rose has been kidnapped by Doctor Eggman again as the fight for the Chaos Emeralds continues. In an attempt to stop Eggman from taking over the world, Sonic gets help from his friends and help him recover the Chaos Emeralds before Eggman does so. Meanwhile, a far more sinister evil looms in the forbidden depths of Enoch's Castle, plotting to merge all realms with his.

Picking up where the prequel left off, Doctor Eggman chases Amy in Green Hill Zone with the intention of getting revenge. Meanwhile, Sonic and Tails return to their friends and fight the scientist at the Green Hill, Chemical Plant, and Death Egg Zones. During a battle at the Death Egg Zone, Doctor Eggman gets a call from the mysterious entity called "the Demonarch" and makes his escape before a rift takes Sonic and his friends to Enoch's Castle. Upon arriving at the castle, Sonic and Tails meet dangerous foes (Gateway Operators, Electricians, Slaughtermen, Starecrows, and the Killgrims) and eventually escape their deadly attacks to save their friends. Sometime before their escape, Doctor Eggman meets the Demonarch, who reveals himself to be Grand Emperor Enoch and agrees to help him find the Chaos Emeralds after being offered an entire legion of robot soldiers. Trapped inside the dark dungeons of the castle, Sonic and his friends formulate a plan and attempt to find out who is behind the slaughtering and horrible treatment of slaves. Separated from their friends, Team Sonic arrive at the Gymnasium and meet Sonic.exe, the interdimensional being from another realm. Sonic.exe separates the team and attempts to kill them, but his plan fails as they escape the areas they were sent to. The evil hedgehog reveals his plan to use the Chaos Emeralds for himself and turn everyone into mindless slaves. Team Sonic becomes trapped in the Gymnasium with Sonic.exe and are forced to fight him and Tails Doll. Once Sonic.exe is defeated by Super Sonic, the castle begins to collapse forcing Team Sonic and their friends to escape through falling debris. After the castle's destruction, Sonic and his friends encounter the heroes who arrived at Tyranos and witness Grand Emperor Enoch draining the power of the Foundation of All Dimensions. Sonic and his friends team up with the heroes for one last battle with Enoch, leaving their fates unknown.

Music used in this level 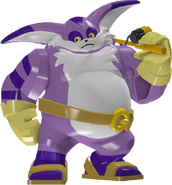 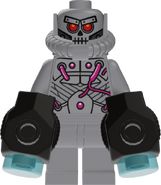