Skull Kid is one of the Blind Bag characters in LEGO Dimensions 2: The Rise of Enoch, from the Legend of Zelda franchise.

After the two become friends, Link can sell the Skull Mask to the Skull Kid as part of the Happy Mask side quest. However, the Skull Kid pays Link only ten Rupees, despite the fact that the price was twenty Rupees, forcing Link to make up the difference out of his own pocket. The Skull Kid is very happy to receive the mask, and takes pride in the fact that his friends are jealous of it. Strangely, after the Skull Kid receives the mask, all other Skull Kids in the game are depicted wearing the mask as well. This is likely due to a programming error, however, since the extra Skull Masks are removed in Ocarina of Time 3D.

The Skull Kid is the primary antagonist for the majority of the game, being the one apparently responsible for the series of disturbances and disasters that have recently plagued the land of Termina, and seeking to destroy the entire land by pulling the Moon out of its orbit and sending it on a collision course with Termina.

Before the events of Majora's Mask he was found by Tatl and Tael during a rainstorm. They eventually befriended, but the Skull Kid's mischief leads to the Happy Mask Salesman, and he then steals a mysterious mask from him. The mask's power then took him over.

Later, on a quest to find a friend he lost during the events of Ocarina of Time, Link travels deep into the Lost Woods astride his horse, Epona. Suddenly, two fairies, Tatl and Tael, appear and frighten Epona, causing Link to fall off and lose consciousness. The Skull Kid, wearing the mask he stole, then appears from out of nowhere, and proceeds to search Link for valuable items. He steals the Ocarina of Time and attempts to play it; meanwhile, Link regains consciousness and, having noticed the Skull Kid, attempts to sneak up on him. The Skull Kid steals Epona and attempts to escape; Link is able to hang onto the Skull Kid's leg for a short while before falling off. He chases the Skull Kid into the forest on foot, entering a huge tree with a great pit inside, into which he falls.

At the bottom of the pit, Link finds the Skull Kid, who informs him that he "got rid of" Epona, as she would not obey his commands. He then proceeds to use the power of Majora's Mask to transform Link into a Deku Scrub. As the Skull Kid is set to leave, Link attempts to give chase once more, but Tatl is able to deter him; unfortunately, this causes her to be separated from her brother Tael and the Skull Kid as the door closes behind them. In desperation, Tatl agrees to work together with Link as his Fairy companion for them to make their escape. Link uses the powers of his new form, along with Tatl's advice, to make his way out of the tunnel complex, and into a large underground chamber. As they attempt to exit the area, the Happy Mask Salesman appears before them. Without revealing too many details, the man tells Link that he can restore him to his Hylian form if he recovers his stolen ocarina, as well as the mask that the Skull Kid stole from him. However, he tells them that they have only three days to complete this task, as he will be leaving at that point.

Exiting the underground chamber, Link and Tatl find themselves in Clock Town, the geographical and economic center of Termina. They are eventually able to access the top of the Clock Tower, where they find the Skull Kid. Link is able to retrieve the Ocarina of Time, but is unable to retrieve the stolen mask. He uses the "Song of Time" to travel back in time to the dawn of the first day he arrived in Termina, thereby avoiding the land's imminent destruction upon the fall of the Moon. He then returns to the Happy Mask Salesman, who teaches him the "Song of Healing", restoring Link's Hylian form. Upon hearing that they failed to retrieve the mask, however, the Happy Mask Salesman is severely distressed, and informs them of the destructive powers of Majora's Mask, and how imperative it is that it is returned to him. They are also provided with further details of how the Skull Kid ambushed the Happy Mask Salesman and rummaged through his bag of masks, ultimately finding Majora's Mask.

Following advice received from Tael, Link and Tatl go on a quest to rescue the Four Giants, guardian spirits of Termina who have the power to halt the falling Moon and have been imprisoned by the curses of Majora's Mask. Along the way, they learn of how the Skull Kid came to meet Tatl and Tael, and witness the many calamities caused by, or attributed to, the Skull Kid. Aside from the seemingly inevitable collision between the Moon and Termina, the land's four outlying regions—Woodfall, Snowhead, the Great Bay, and Ikana—have all also been plagued by different environmental crises, each of which is undone once Link rescues the Giant guarding that region. It is unknown how many of the Skull Kid's crimes, which range from petty vandalism and threats of theft, to attempting to destroy everything, were perpetrated under the influence of the mask—especially since the Skull Kid's mischievous nature was apparently present before the introduction of the mask. At the very least, it is made clear that the most wicked of the Skull Kid's deeds are due to the influence of Majora's Mask.

From Anju's Grandmother, Link and Tatl learn the story of the Four Giants and their friend, the mischievous little imp known as the Skull Kid, who was greatly saddened by their leaving. This sadness, in time, turned to great hate and contempt, and may have influenced the Skull Kid's decision to steal Majora's Mask, or his susceptibility to its powers. In his anger, the Skull Kid caused more trouble for the people of Termina, until they summoned the Four Giants from their sleep, who banished the Skull Kid. In the present, each time Link rescues a Giant, they implore Link to "help their friend" by playing the "Oath to Order" at the time of utmost need.

Having rescued all of the Four Giants, Link returns to the top of the Clock Tower and summons them. Not having the strength to battle the combined power of the Four Giants, the Skull Kid faints, and the Moon's progress is halted. As Tatl and Tael are reunited, Termina seems to be saved; however, the mask, revealed to have been a sentient entity known as Majora all along, abandons the Skull Kid and retreats into the Moon, activating it once again with the intent to consume everything. Link follows after it, and after he defeats the many forms of Majora, it is ultimately destroyed. The Moon disappears, and the mask, now powerless, is returned to the Happy Mask Salesman. As the Four Giants leave once more, the Skull Kid realizes that his old friends had not forgotten him, and that he must let them go. He declares Link his new friend, and at the end of the game, he is revealed to have carved an image of himself, Link, their two Fairy friends, and the Four Giants into a stump in the Lost Woods. 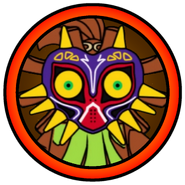 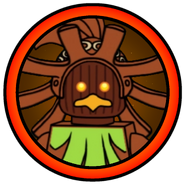