LEGO Dimensions Customs Community
Register
Don't have an account?
Sign In
Advertisement
in: Customs by CJDM1999, Custom Characters by CJDM1999, Minecraft,
and 27 more

Skeleton is one of the Blind Bag characters in LEGO Dimensions 2: The Rise of Enoch, from the Minecraft franchise.

Skeletons are undead mobs equipped with bows. Like other undead mobs, they are vulnerable to sunlight. There is also a snow variant called the Stray.

Skeletons appear to Andy and his friends and attempt to kill them with their arrows. Eventually, the heroes defeat them and evade the rest of the mobs on their way to the Nether. These mobs are encountered again there, but they are backed by Wither Skeletons. 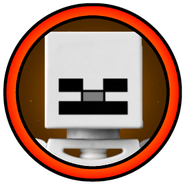