Shadow the Hedgehog is one of the Blind Bag characters in LEGO Dimensions 2: The Rise of Enoch, from the Sonic the Hedgehog franchise.

Shadow is an anthropomorphic hedgehog who was created artificially to be the "Ultimate Life Form". He was created by Doctor Eggman's grandfather Professor Gerald Robotnik on-board the space research station known as the Space Colony ARK. Gerald was funded by the military, but soon after Shadow's creation, they cancelled the research and shut down the Ark, citing that a horrible accident had occurred, but in reality, the military attacked the Ark and captured Shadow. 50 years later, Eggman released Shadow, believing him to be a top-secret weapon, and convinced him to help with his plans for world domination. Shadow agreed as he was seeking revenge for the death of his only friend Maria Robotnik, who was killed when the military attacked the Ark. Shadow was shown the error of his ways by Amy Rose and he then sacrificed himself to help Sonic the Hedgehog save the Earth from a collision with the Ark. Shadow fell towards the planet in his super form and was presumed dead, but was later found alive with serious memory loss. Shadow is fiercely independent and highly motivated and will never stop to achieve his goals, even if it means going up against Sonic. Shadow is capable of matching Sonic's speed and agility and can be stronger than Sonic in terms of combat capabilities, which has caused a rivalry between the two hedgehogs, but despite this, the two have been able to work together. Nowadays, Shadow works with his two closest allies: E-123 Omega, a renegade Eggman robot, and Rouge the Bat, an expert treasure hunter who works for an organization known as G.U.N (which stands for Guardian Units Of Nations). G.U.N is the very same military organization that attacked the Ark, but only now Shadow has made peace and agreed to work with them. 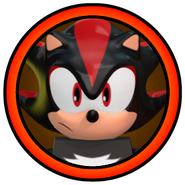