LEGO Dimensions Customs Community
Register
Don't have an account?
Sign In
Advertisement
in: Customs by CJDM1999, Custom Characters by CJDM1999, Marvel,
and 24 more

Member of the Avengers

Scarlet Witch is one of the Blind Bag characters in LEGO Dimensions 2: The Rise of Enoch, from the Marvel Comics franchise.

Scarlet Witch was a Mutant who could warp reality, alter probabilities and cause a "bad luck" effect to any person or place she signaled with her hand. Wanda and her brother Quicksilver were the half-siblings of Polaris and the children of Magneto, briefly working in their father Magneto's Brotherhood of Mutants out of gratitude to him, but they left Magneto at the first chance and joined Captain America's new roster of Avengers alongside Hawkeye. Some time later, she fell in love with and married another Avenger, Vision. Wanda also learnt some "genuine" magic under the tutelage of Agatha Harkness.

Wanda Maximoff is a native of Sokovia who grew up with her twin brother, Pietro. In an effort to help purge their country of strife, the twins joined HYDRA and agreed to undergo experiments with the Scepter under the supervision of Wolfgang von Strucker, and received her superpowers as a result, with Wanda attaining various abilities including telekinesis, telepathy, and energy manipulation. When HYDRA fell, the twins joined Ultron to get their revenge on Tony Stark, but eventually switched sides and joined the Avengers when they discovered Ultron's true intentions. Although Pietro was killed during the ensuing Ultron Offensive, Wanda survived and became a member of the Avengers. During the Avengers Civil War, she sided with Captain America and was briefly imprisoned in the Raft before Rogers freed her along with his teammates.

Over the next two years, Maximoff reunited and reconciled with Vision, and together the two started living off the grid in Europe, forming a romantic relationship. However, the two soon came under threat from Thanos and the Black Order, who sought the Infinity Stone in Vision's head. After coming under attack by the Order, the two Avengers reunited with their teammates and sought refuge in Wakanda. Maximoff partook in the city's defense when the Black Order launched a major assault against it, and during the battle, she managed to destroy the Mind Stone in attempt to stop Thanos, killing Vision in the process. However, using the Time Stone to reverse Vision's destruction, Thanos seized the stone from Vision allowing him to complete the Infinity Gauntlet; Maximoff was subsequently disintegrated in the Snap.

After the effects of the Snap were undone in 2023, she was enlisted by Doctor Strange to aid her teammates, the Avengers, during the Battle of Earth, where she played an instrumental role in the Mad Titan's defeat. Maximoff attended Stark's funeral along with the other heroes. After the funeral, she comforted Clint Barton telling him Romanoff would be proud of him, remembering Vision too.

She then appears in the sitcom-like show "WandaVision" alongside Vision and Agnes, along with numerous people she has slaved into a hexagon shaped field, she changed to timeline in the 'hex' every episode, in episode three she has two twins, Billy and Tommy Maximoff. The company S.W.O.R.D's agents were trying to stop the hex and free the people, in the sixth episode it's revealed she recreated the dead Vision, and her children and husband will be killed if she closes the 'hex', and Agnes, now revealed to be 'Agatha Harkness' attempts to steal Wanda's power, but ends up losing in the process. And Wanda after spending the last moments with her kids, closes the hex, killing them, and the now free towns people show hateful glares as Wanda walks by. Later, it shows Wanda is trying to bring back the dead twins by using her magic. 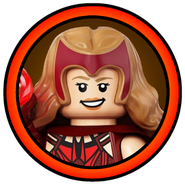