Rosalina, Lady of the Shooting Stars

"My name is Rosalina. I watch and protect the cosmos."

"Disaster has struck us. I must save the Multiverse from another!"

Rosalina is one of the Fun Pack characters in LEGO Dimensions 2: The Rise of Enoch, from the Super Mario franchise.

Rosalina (ロゼッタ Rosetta?) is a celestial sorceress who is the guardian of space, and the adoptive mother of the Lumas. Rosalina made her debut in Super Mario Galaxy, though she has become a recurring character in spin-off games. She lives in space with her adopted children, the Lumas, and travels the universe on the Comet Observatory.

Rosalina is a woman with great power, whose sole duty is to watch over and guard the universe, the Mushroom World and protect the Lumas. Rosalina's back-story is described in her story book, which is found in the Comet Observatory's Library in Super Mario Galaxy, telling her past of her time living on Earth and how she met the Lumas. She is currently voiced by Laura Faye Smith.

-Rosalina's line when in combat.

"I've been waiting for you, Mario."

"I've been waiting for you, Luigi." 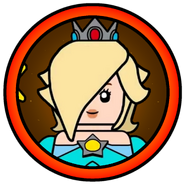