Robin (Jason Todd) is one of the Blind Bag characters that is playable in LEGO Dimensions 2: The Rise of Enoch when purchasing a Blind Bag containing the Red Hood.

Jason Todd was the second Robin after Dick Grayson left. Unlike Dick, Jason was much more aggressive, to the point where he almost killed Two-Face. Later on, he traveled to Ethiopia to find his mother, who ended up being Dr. Sheila Heywood. However, she betrayed him and revealed that she was working with The Joker. Joker then proceeded to beat Jason to death with a crowbar. He left the building, locking both Jason and Sheila inside. Instead of chasing the Joker, Batman instead went to save Jason, but he was too late. Joker had left a bomb inside, and unfortunately both Jason and Sheila were killed. Years later, Jason was resurrected by Ra's al Ghul, and returned to Gotham as the anti-hero Red Hood. 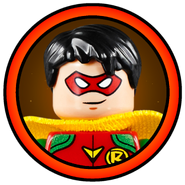