Leader of the Teen Titans

Robin (Dick Grayson) is one of the playable in-game characters in LEGO Dimensions 2: The Rise of Enoch, from the DC Comics franchise.

As a child, Dick Grayson was part of a circus act known as The Flying Graysons. One night, his parents were murdered during the act. Dick was then adopted by Bruce Wayne, the better known as Batman, who recruited Dick to become his crime-fighting sidekick Robin. After years of serving as Robin and working with Batman and Batgirl, Dick grew tired of being overshadowed and chose to strike out on his own. Around this time, he formed the Teen Titans with other sidekicks and young heroes, such as Kid Flash, Wonder Girl, Cyborg, Raven, Beast Boy, Starfire among others and fought villains such as Deathstroke, Brother Blood, and even Trigon the Terrible. His responsibility as leader of the Titans reached a point where he wasn't able to dedicate time to his other role as Batman's sidekick. Dick then adopted the mantle of Nightwing (a name taken from a kryptonian legend told to him by Superman) and retired his Robin mantle, which would be used by Jason Todd later, therefore dedicating himself to be the Titans' leader full-time.

Nightwing is a member of the Bat-family which primarily consists of Batman, Robin, Red Hood, Red Robin, Alfred Pennyworth, Batgirl, and Commissioner Gordon. He has joined several incarnations of the Justice League and the Outsiders, as well as occasionally assisting the Birds of Prey and newer line-ups of Teen Titans.

Dick Grayson has also taken on the mantle of Batman when Bruce Wayne was lost in time. This all happened before the New 52 started and it soon ended once Bruce came back to get the mantle back in his ownership. 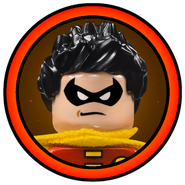