"I'm not your typical Robin. Don't believe me? Ask my dad."

Robin is one of the Team Pack characters in LEGO Dimensions 2: The Rise of Enoch. He appears in the Dynamic Duo Team Pack alongside Batman for the DC Comics franchise.

Damian is the son of Bruce Wayne and Talia al Ghul. Under his mother's care, he has been trained by the League of Shadows. After Talia reveals Damian's existence, she dies leaving him to his father. He then joins Tim Drake with the mantle of Robin, leaving Batman with two Robins. After Bruce's temporary death, Dick Grayson becomes Batman and takes Damian under the mantle of Robin, thinking Tim as more of an equal than a sidekick. Tim begrudgingly becomes Red Robin and Damian takes over as Robin. After Bruce returns and resumes the mantle of Batman, he and Damian fight crime as father and son.

Robin is a member of the Bat-family which primarily consists of Batman, Nightwing, Red Hood, Red Robin, Alfred Pennyworth, Batgirl, and Commissioner Gordon. 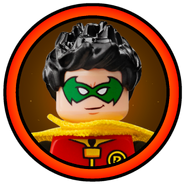