Leader of the League of Shadows

"The Head of the Demon cannot be stopped by mere mortals."

Ra's al Ghul is one of the Team Pack characters in LEGO Dimensions 2: The Rise of Enoch. He appears in the Demon's Legacy Team Pack alongside Talia al Ghul for the DC Comics franchise.

Ra's al Ghul is the head of an assassin organization known as the League of Assassins (also known as the League of Shadows), in fact, his name translated from Arabic means "Head of the Demon", and an international terrorist, attempting to bring the world into perfect enviromental balance by eliminating most of humanity while also trying to conquer it to instil an era of order. Ra's has lived for centuries, so long that he has forgotten his real name, by bathing in the youth-restoring Lazarus Pit. Ra's is a master in martial arts and very intelligent. He has a daughter named Talia who is loyal to him, but has betrayed him on several occasions. When Ra's moved his base of operations to Gotham, he deduced Bruce Wayne's identity as Batman and offered him to wed Talia and to become Ra's heir. Batman refused, even though he and Talia fell in love, and Ra's became one of his enemies.

Ra's found a replacement for Batman as an heir in the form of the detective's arch-nemesis Bane. At first, Ra's dismissed Bane as an unworthy thug until Bane outwitted Ra's in a way that forced the demon to keep Bane as an ally. Praising Bane's intelligence, Ra's briefly took him as his new heir, engaged to Talia. 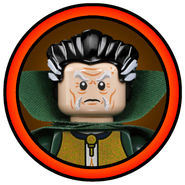