Princess Zelda is one of the Fun Pack characters in LEGO Dimensions 2: The Rise of Enoch, from the Legend of Zelda franchise.

Zelda, Princess of Hyrule, best known simply as Princess Zelda (ゼルダ姫 Zeruda-hime?, ) is the name for several female Hylians, usually members of the Royal Family of Hyrule, who often play an integral role in the series. Though each is the titular character of the Legend of Zelda series, the actual protagonist is each era's respective Link.

She mostly gets captured by Ganondorf and rescued numerous times by Link.

In Ocarina of Time, she hides from the great king of evil Ganondorf by disguising as Sheik. 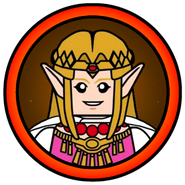