Princess of the Mushroom Kingdom

Princess Peach is one of the Fun Pack characters in LEGO Dimensions 2: The Rise of Enoch, from the Super Mario franchise.

Princess Peach (ピーチ姫 Princess Peach?) also known as Princess Peach Toadstool, Princess Toadstool, or simply Peach, is the ruler of the Mushroom Kingdom, making her debut in Super Mario Bros.. She is the damsel-in-distress in most of the Mario games. She has a love for the color pink, as almost all of her dresses have a shade of the color. She is named after a fruit in the real world, and also one that occasionally appears in RPGs, the Peachy Peach. Her love interest is Mario. She first appears in Super Mario Bros. and has since appeared in most subsequent games, in which she is usually kidnapped by Bowser. Princess Peach is occasionally a key supporting character of the plot, and sometimes a playable character. Her most notable appearance is as the protagonist of Super Princess Peach. She has also shown her fighting abilities in Super Mario Bros. 2, Super Mario RPG: Legend of the Seven Stars, Super Paper Mario and Super Smash Bros. series. Princess Peach's first game as the main character, Super Princess Peach, has been released worldwide on February 27, 2006. She has also gone through many voice actresses and is currently voiced by Samantha Kelly. She has an affinity for the color pink and is a ladylike, kind and very beautiful monarch. Princess Peach resides in her castle along with many Toads who tend to her. She sometimes is about to get her kingdom often attacked by the Koopa Army, lead by King Bowser Koopa. Princess Peach is portrayed as Mario and Bowser's love interest. She also has a special relationship with Princess Daisy, and is a good friend of Luigi, Yoshi, Toad, and Toadette. She has appeared in many sports titles as well as other spin-offs. Also, she is almost always playable in spin-off tournaments, such as Mario Hoops 3-on-3. Bowser has also shown to be in love with her in several games. Some of his attempts to kidnap her are so that he can marry her and make her his queen. 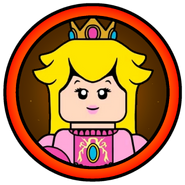