Poison Ivy is one of the Blind Bag characters in LEGO Dimensions 2: The Rise of Enoch, from the DC Comics franchise.

Pamela Lillian Isley was a young botanist. When her professor tricked her into stealing ancient herbs, he poisoned her with them so she could not give him away. She survived and while getting an immunity to toxins, Isley went insane and became Poison Ivy, an eco-terrorist out to save the environment in a deranged way. Because she acquired plant powers, Ivy revolves her crimes around her obsession with plants and a twisted way of saving the environment. In addition to her knowledge of plants and toxic immunity, Ivy is known to also be able to manipulate plants with her mind. Harley Quinn is a chief ally of hers in several of her schemes, her best friend, and usually the only human Ivy doesn't hate, though she has an on-and-off friendship with Catwoman and has shown attraction to Batman. She hates The Joker because of his attitude towards her and Harley; Poison Ivy has teamed up with Batman a few times to stop his plans.

Though she is a villain, Ivy has fought with Batman and Batgirl against other rogues, probably most notably as a member of the Birds of Prey.

Amanda Waller has recruited her several times in the Suicide Squad alongside Bronze Tiger, Captain Boomerang, Deadshot, an amnesiac Lashina and others, in exchange for a reduced jailtime.

"Next time, don't forget the water."

"Remember; we always grow back."

"My plants are calling to me... they need the Green." 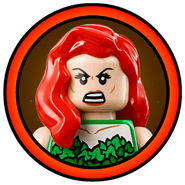