Pluck Rex is a Venture: Bounty character in LEGO Dimensions.

Pluck Rex is an insurgent from Swinton. Pluck Rex joined Soren Helt's rebellion after fighting with him in the Battle of Swinton. While typically stoic, Pluck clearly cares about other people, as he wishes to atone for having killed civilians with a grenade intended for the Void Monsters. 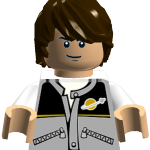