LEGO Dimensions Customs Community
Register
Don't have an account?
Sign In
Advertisement
in: Customs by CJDM1999, Custom Characters by CJDM1999, Minecraft,
and 18 more

Piglins are non-playable characters in LEGO Dimensions 2: The Rise of Enoch, from the Minecraft franchise.

A Piglin is a neutral mob found in the Nether. They attack players on sight unless the player is equipped with at least one piece of golden armor. Players can use gold ingots to barter with them for various items. 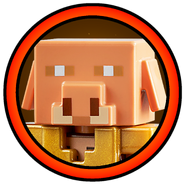