Phil Swift is one of the Blind Bag characters in LEGO Dimensions 2: The Rise of Enoch, based on the businessman of the same name who works and runs as CEO of Flex Seal.

Philip (Phil) Swift is an American businessman who, along with his brother Alan Swift, is the joint owner of the company Flex Seal Products which specializes in a line of waterproof adhesive bonding products that include Flex Seal, Flex Shot, Flex Tape, Flex Glue, Flex Mini, and Flex Paste. He is also the spokesperson for the brand and appears on television commercials showcasing the power of his products by, for instance, sawing a boat in half and then repairing it. Such feats have made him a pop culture icon after popular YouTuber JonTron (real name Jon Jafari), who provides comedic commentary about video games, movies, or infomercials, decided to make a video about the various Flex Seal Products infomercials. The company has been sponsoring NASCAR Xfinity Series team JD Motorsports since 2013. While there have been doubts over the effectiveness of Flex Seal Products to the extent shown on infomercials, in February 2017, after a sponsored NASCAR car driven by Garrett Smithley crashed at Daytona, Flex Tape was used to repair the damages and he finished the race in the eighth position.

With all the fame he had, many people on the internet wanted to know where he came from and think of 73 years old, but Phil says he's not. Flex Seal's tweet even said "Don't trust the internet". Some people said that he is the reincarnation of and/or the next Billy Mays. Phil denied those claims and said he wanted to be the first Phil Swift.

"Going to Flex World, y'all need anything?"

"Look at this! This is awesome!"

-Phil Swift when collecting a collectible.

"May need to add a few more coats."

-Phil Swift when unable to solve a puzzle.

"And the inside is completely dry!"

-Phil Swift when inside the Flex Seal Submarine underwater.

"♪ Who can make a sunrise? (laughs) Sprinkle it with dew. ♪"

-Phil Swift's line when on idle.

"♪ The candy man bakes. Everything he makes. Satisfying and delicious. Talk about your childhood wishes. You can even eat the dishes. ♪"

"It even works underwater!"

"Red, blue, and green, it's the coolest sub you've ever seen!"

"Wow! I can see right through!"

"Don't eat 'em. Don't ingest them in any shape or form. They're not to be eaten."

"What are you looking at?"

"Wow! Look at all these beautiful colors!"

-Phil Swift's when entering any mech or seeing any giant character. 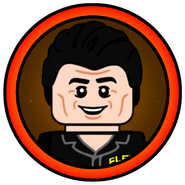