Dol Guldur
The Necromancer is one of the Polybag characters in LEGO Dimensions 2: The Rise of Enoch, from The Hobbit franchise.

After Sauron was destroyed in the Second Age, his spirit fled Mordor and took refuge in one of Mordor's ruined strongholds, Dol Guldur, in southern Mirkwood. There, and accompanied by one of his deadliest servants, the Witch-King of Angmar, he took the pose of a dark sorcerer, so called the "Necromancer". He then began to expand his influence upon the forest, using Gundabad Orcs, Wargs and Mirkwood Spiders to do his bidding.

Upon discovery by Radagast the Brown, the guardian of Mirkwood, Radagast and Gandalf took action against him, under Galadriel's wishes. Azog and a battalion of Orcs later ambushed Gandalf at Dol Guldur, when he was searching for the Necromancer. Gandalf ran through a corridor, where he found and fought the Necromancer. The latter revealed himself to be Sauron, and defeated Gandalf. Azog then caged the defeated wizard, as the Necromancer's evil army of Orcs marched towards the Lonely Mountain.

However, after his Orc army was defeated, the White Council put forth their might and drove the Necromancer from Dol Guldur permanently However, the Dark Lord, having had ample time to prepare, was willing to abandon Dol Guldur, and returned to Mordor, where he openly declared himself alive and began preparations for his armies. 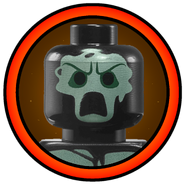