Leader of the Cult of Nazgûl

"I am Nazgûl Ruth Al, destroyer of worlds! And yours shall be next!"

Nazgûl Ruth Al is one of the non-playable characters in LEGO Dimensions 2: The Rise of Enoch, from the Game Grumps franchise.

Nazgûl Ruth Al is a warlock who apparently originated in the Necronomicon. According to Dan, who is recounting his improv days, Ruth Al has two hearts and four stomachs like a cow. His first non-physical appearance on Game Grumps was in The Legend of Zelda: Breath of the Wild episode Windblight. One of the two competing elderly ladies is his grandmother.

During the Grumps' unexpected encounter with Ash Williams, the latter accidentally uses the Necronomicon Ex-Mortis to summon the warlock, allowing him to wreak havoc in the Nintendo Multiverse starting with the Super Mario World. He takes the form of a Dark Elf sorcerer.

Along the way he kidnaps JonTron, former co-host and founder of the Game Grumps. He also kidnaps Princess Peach, and Princess Zelda.

"Come on, Grumps! Put your hearts in it!"

"Welcome to the beginning of the end, fools!"

"Just where do you think you're going, Game Grumps?"

"Ha ha ha! You cannot hope to defeat me!" 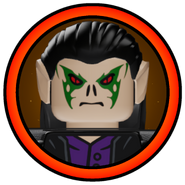