"Just-ice shall be served!"

"Mr. Freeze, making ice puns before it was cool."

Mr. Freeze is a playable character in LEGO Dimensions: The Multiverse Curse, from the DC Comics franchise.

Dr. Victor Fries was a mere Gotham City scientist who used cryo-stasis technology to cryogenically freeze his wife Nora, who had a rare disease, so he could have more time to save her. However, an accident in the laboratory caused his body temperature to revert to below zero and as a result, he was forced to wear a refrigeration suit to survive the mutations. Fries then deemed himself "Mr. Freeze" and staged robberies in order to fund his project. He also stole diamonds in order to power up his suit. In addition to his cryotechnic genius, Mr. Freeze wields an ice-powered gun that freezes targets.

In the 1966 television series, Mr. Freeze was known as Dr. Art Schivel. His body temperature was accidentally lowered by a freezing solution used by Batman, and Freeze became his enemy in an attempt to get revenge.

"I must check on Nora's chamber."

"Perhaps the cure is elsewhere..."

"My suit is running out of power. I need more diamonds."

"This should prove to be easy enough."

- Mr. Freeze when about to solve a puzzle.

"Hm... This obstacle appears to be frost-proof. Somebody else should handle this."

- Mr. Freeze when unable to solve a puzzle.

"Success! I almost prefer this to cold, hard cash."

- Mr. Freeze when obtaining a collectable.

"Can your magic save my wife?"

"I envy your lack of emotion."

"You are a rare specimen."

"My gun will freeze you in your tracks."

- Mr. Freeze when seeing the Flash.

"You can't stop my research, Batman."

"Your suit's design is quite interesting."

"Your kingdom will soon be iced over."

"This vehicle could prove useful..."

- Mr. Freeze when riding the Freezemobile.

"I am beyond terror and fear. Your size does not scare me."

- Mr. Freeze when seeing a big character or riding a mech. 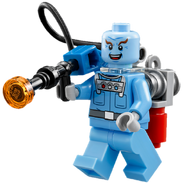