LEGO Dimensions Customs Community
Register
Don't have an account?
Sign In
Advertisement
in: Customs by CJDM1999, Custom Characters by CJDM1999, Disney,
and 19 more

Co-owner of the House of Mouse

Others vary by role

Mickey Mouse is one of the Blind Bag characters in LEGO Dimensions 2: The Rise of Enoch, from the Disney franchise.

Mickey Mouse is an animated character created by Walt Disney and Ub Iwerks. A cheerful anthropomorphic mouse, Mickey made his first public appearance in Steamboat Willie, on November 18, 1928. Estimated as standing 2' 3" (68.58 centimeters) and weighing 23 pounds (10 kilograms), Mickey is easily identified by his round ears, red shorts, white gloves, and yellow shoes. He speaks in a falsetto voice, and his speech is typically infused with 1930's slang like "swell" and "gee".

The essence of Mickey’s character is based around the underdog archetype, most prominently illustrated by his small size. In compensation for his stature, Mickey must rely on his quick-wit and athleticism to overcome larger-than-life adversity. With characteristics inspired by vaudeville comics and swashbucklers from the silent film era, Mickey is depicted as a lovable rogue—being bodacious and optimistic, but also mischievous and ungainly.

Mickey was popularized by his long-running short film series. His simplistic, "rubberhose" design allows for both relatable emotion, and exaggerated physical gags. Mickey’s versatility, meanwhile, enables him to slip into any profession, location, or time period, while maintaining his core characteristics. Mickey steadily branched into other mediums over the years, beginning with a comic strip by cartoonist Floyd Gottfredson in 1930. In 1940, Mickey made his feature-length film debut with Fantasia, for which he was given his modern redesign by animator Fred Moore. In the 1950’s, Mickey became a television mainstay with the premiere of The Mickey Mouse Club, as well as an icon for the Disney theme parks with the opening of Disneyland. Mickey has also featured prominently in critically acclaimed video games such as 1990’s Castle of Illusion and the Kingdom Hearts series.

With an endearing personality and imaginative cartoons, Mickey rapidly rose to the pinnacle of American culture, becoming the most popular and recognizable cartoon character in the world, and the prime influence of following cartoons. For all his acclaim, none have viewed Mickey more fondly than Walt Disney, himself. The two were widely regarded as "alter-egos" by peers and historians, a perception supported by Walt originating Mickey’s voice. Disney once attributed his success to the advent of Mickey, famously proclaiming that, “it was all started by a mouse”.

As its most famous character, Mickey serves as the mascot of the Walt Disney Company. He has appeared in over 130 films, for which he received numerous accolades. In 1932, Walt Disney was presented an honorary Academy Award for the creation of Mickey Mouse. In 1978, Mickey became the first animated character to receive a star on the Hollywood Walk of Fame. His 3-circle silhouette serves as the logo for most of Disney's subsidiaries, save for the ones that don't carry the 'Disney' or 'Walt Disney' label. 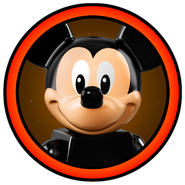