Martian Manhunter is one of the Blind Bag characters in LEGO Dimensions 2: The Rise of Enoch, from the DC Comics franchise.

The Martian Manhunter was once a martian called J'onn J'onzz on Mars. After all the natives died and the planet had been invaded, J'onn J'onzz was teleported by a scientist from our planet. From there on, he was stranded on Earth. He then discovered the power that he had should have used to be a hero. So J'onzz now works as a superhero known as The Martian Manhunter (on Mars, a Manhunter is a term for a policeman) and uses his shape-shifting and telepathy powers to solve crimes. He is a member of the Justice League which also includes Superman, Batman, Wonder Woman, Green Lantern, The Flash, Aquaman, Cyborg, and occasionally, Batgirl, Nightwing, Supergirl, Hawkman, Hawkgirl, Shazam!, Zatanna, and Huntress. 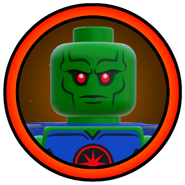