"Yo! Soul brother, shall we dance? It's about that time - time for the fandango through the flames, the hotrock harmony to the sound of sizzling flesh and his tijuana orchestra!"

Marco Cruz is one of the non-playable characters in LEGO Dimension 2: The Rise of Enoch, from the Shadow Man franchise.

From February to November, 1996, Marco Roberto Cruz kidnapped and murdered ten people, preying on couples mainly in and around Death Valley and the Mojave Desert.

The following symbol and poem were found near each victim, it reads:

For in the western deserts HE finds a form,

HE is the child with the mouth of blood,

The bleakness before the beginning of time,

HE is the glint of ice in a murder's eye,

The savage heart of every crime.

FOR WE ARE MANY.

Ironically, Cruz actually worked as a Repo Man for five years. He also worked as a deejay and had an auto shop business at one time. Served seven years for armed robbery and aggravated assault. No previous convictions for homicide but was implicated in several killings, with lack of evidence to convict. It is not known whether he is among the inmates involved in the riot at the jail.

"You know full well that the firewalk's all about keeping your cool, 'bout being the iceman cometh through the valley of outrageous fortune! Here come the slings and arrows, mister Yorick. Let's rock n' roll through that valley of death! Yee-hoooooo!"

"For we are many, pilgrim!"

"I mean, like if you, like, met God would you know I mean would he be a kind man, a-a righteous man, would he, like, turn water into wine, make loaves and fishes? The miracle isn't the point man, definitively, isn't anything to do with being good, with being moral. When he speaks to me, he talks in poetry. He's an artist you know, like, he's a warrior priest from beyond the stars!"

"You can't make it on your own pilgrim, you should know that. It's the only situation where you need the numbers, like, what is a one when you could have many, when you can have a five? It's a gestalting thing pilgrim, it does away with a fear and loathing it means never having to say you're sorry!" 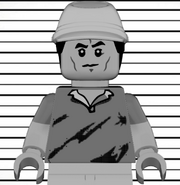