Member of the Order of the Phoenix

Mad-Eye Moody is one of the Blind Bag characters in LEGO Dimensions 2: The Rise of Enoch, from the Harry Potter franchise.

Alastor "Mad-Eye" Moody was an Auror (dark wizard catcher) during the first wizarding war and became scarred and considerably paranoid by the time he retired.

Before Harry Potter's fourth year at Hogwarts began, Albus Dumbledore recruited him as the new Defense Against the Dark Arts teacher and to assist with the Triwizard Tournament.

At Hogwarts, he took a liking to Harry, and secretly rigged some of the Triwizard events and choosing so that Harry would win.

It was later revealed when Harry escaped from Lord Voldemort that Mad-Eye was in fact Barty Crouch Jr. in disguise, one of Voldemort's followers who was believed dead and that he was using hair from the real Moody, who had been locked in a trunk, in a polyjuice potion to take on his appearances.

The real Moody became a member of the reformed Order of the Phoenix and helped extract Harry from Privet Drive. He also took part in the Battle of the Department of Mysteries.

Moody once again appeared as a member of the Order of the Phoenix to remove Harry from Privet Drive before Voldemort could attack him. He was escorting Mundungus Fletcher disguised as Harry on a broomstick when he was killed by Voldemort.

His magical eye which had X-ray vision was somehow obtained by Dolores Umbridge who used it to spy on her underlings through her office door. Harry and Ron Weasley took the eye when they came across it while infiltrating the Ministry of Magic and later buried it in the woods they retreated to afterwards. 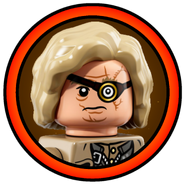