The Harmony Lock can only be used by Twilight Sparkle.

Only Twilight Sparkle, Rainbow Dash, and Fluttershy have this ability.

Interactible clouds float above the characters, and must be hit with a character that has this ability three times. Other characters will get zapped with a lightning bolt, which does damage to them (unless the character in question is immune to electricity). Upon being hit, the cloud shrinks and drops studs, as well as vital pieces to progressing further in levels.

Side view of switch 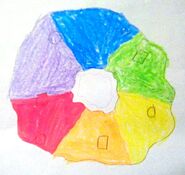 The Sonic Rainboom
Add a photo to this gallery

Only Rainbow Dash can use these switches.

If any other character tries to use this, the fan will blow them away.

Retrieved from "https://lego-dimensions-customs.fandom.com/wiki/MLP_Miscellaneous_(Creepa-Bot_Inc.)?oldid=32450"
Community content is available under CC-BY-SA unless otherwise noted.