Trapped in another reality (currently)

"LOOORD VORTECH! Ahem, too much?"

"Oh, somewhere a dimension needs to be destroyed."

"All dimensions belong to me!"

As the main villain of LEGO Dimensions, Lord Vortechius Vortell Vortech plans to dominate The Multiverse by using the Foundation Elements at Foundation Prime, the center of the multiverse. Using vortexes to open rifts between worlds, he starts capturing characters such as Robin, MetalBeard, and Frodo to take the Foundation Elements that they have in their possession: (The One Ring, a piece of Kryptonite, and a treasure chest). With his ancient powers, he opens rifts to many different dimensions to collect an army of bad guys to help him achieve his ultimate goal - to rule all the entire multiverse and everyone who inhabits it. Unknown to Vortech Batman pursued Robin through the rift and was taken to the Lord of the Rings World where he saved Gandalf. When Vortech opened a rift to capture Frodo, Batman and Gandalf followed the rift and ended up in the the LEGO Movie World. This time Vortech opened the rift before Batman and Gandalf arrived capturing MetalBeard and his treasure. Realising his mistake Vortech opened a rift to bring Batman and Gandalf to him on Foundation Prime, however Wyldstyle is also taken and Batman uses her scanner to disrupt Vortech's rift sending the three to Vorton and escaping capture. Vortech then unleashes his army to retrieve the foundation elements and stop the three heroes.

When the villains failed in their plots to stop Batman, Gandalf and Wyldstyle from defeating them and gained new allies such as the Doctor, X-PO, and many others, Vortech took matters into his own hands by facing them down in 1885 Hill Valley, later mysteriously retreating back to his lair at Foundation Prime. He confronted them again later, disguising himself as a mummy and pretending to steal a Foundation Element. When the three heroes retrieved it from him, he was able to track them down, summoning the three to Foundation Prime and putting them in a maze while simultaneously sending the Joker to ransack their headquarters in Vorton. Vortech put the heroes at his mercy as he used the Foundation Elements to create a "perfect world" and merge MetalBeard, Robin, and Frodo together to create The Tri, a triple-headed entity based mainly off of MetalBeard, but also adding elements of Robin and Frodo's costumes that could merge the worlds together. After the defeat of the Tri, the heroes attempted to escape the exploding robotic Tri-suit by way of a fragment of Vortech creating a singularity.

Assembling an army of their allies (and GLaDOS) to take on Lord Vortech, the three heroes set up a plan with the Doctor to trap Vortech in a Rift Loop, similar to a situation they had been put in before, but a now-omnipotent Vortech anticipated this, encountering them in their trip through their portal. Despite his nearly godlike status, Vortech was unable to stop the heroes from reaching Foundation Prime even with the help of Bane although the heroes did have a little help from the Doctor and his TARDIS. There, Vortech engaged the trio in a final showdown, eventually being defeated by being sucked into one of his own portals, ending his threat. As ensurance that his meddling would finish, the heroes trapped Vortech in an alternate reality in a "perfect" prison, thus removing him from their reality forever.

However, a small brick fragment of him remained on his lair at Foundation Prime, and an unlikely man (possibly Bob) stumbled across it. The Vortech fragment merged with the stranger, turning him into an entity similar to Vortech himself, complete with the voice and evil laugh. It's unknown what happened to him afterwards

Lord Vortech's laugh can be heard when a safe path to the Temple of Foundation is destroyed by missiles.

In the Epilogue, Foundation Crime, the Heralds of Vortech, and a remnant of the Grand Empire appear before the mysterious entity and pledge their allegiance to him, beginning the formation of the Vortech Ascendancy.

"I have more pressing matters to attend to!"

"This treacherous place holds something of value, and I will find it."

-Lord Vortech's line when in the vortex.

"Hmm, could this bring me closer to a Foundation Element somehow?"

-Lord Vortech when about to solve a puzzle.

"Well, it's no Foundation Element, but I'll take it."

-Lord Vortech when collecting a collectible.

"Hmm, let's see how many dimensions this thing has."

"Now, to realize the true potential of this device."

"This unity of ours is only temporary, Ratman."

"You have no power here, Granddad... Stormcrow, or whatever your name was."

"Let us Master Build a new dimension together, Wyldstyle."

"X-PO, analyze this alien contraption! Oh, I forgot, I banished you."

"You may look like me, but Lord Vortech has no equal!"

"Some of us don't need a fancy blue box to travel between dimensions, Doctor."

-Lord Vortech to The Doctor.

"Prepare to be knocked into another dimension!"

-Lord Vortech when in combat.

"Fool! I shall banish you from this world!"

"I command you to moooooove!"

"(Lord Vortech grumbles) Someone's going to pay for that!"

-Lord Vortech when being in Vorton.

"Where is X-PO when you need him? I suppose I'll have to do this myself."

-Lord Vortech's line when about to solve a puzzle.

"An impressive show of strength. See that it does not disappoint me!"

-Lord Vortech's line when entering any mech or seeing a giant character.

"Ahem. This machine isn't that mysterious. It's a van."

"Why is this silly thing a police box? I thought he was a doctor, not a policeman!"

"This primitive device should pose no problem for Lord Vortech to use."

"What? This thing can only go backwards and forwards in time? Boring!" 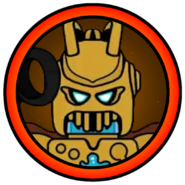 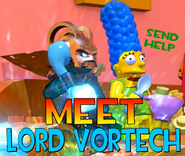