LEGO Dimensions Customs Community
Register
Don't have an account?
Sign In
Advertisement
in: Customs by CJDM1999, Custom Characters by CJDM1999, Cars,
and 21 more

Lightning McQueen is one of the Blind Bag characters in LEGO Dimensions 2: The Rise of Enoch, from the Cars franchise.

In Pixar's Cars movie, Lighting McQueen, a Piston Cup racecar, had a dream to be the first rookie ever to win a piston cup. He was haughty and stuck up in the beginning of the movie, and didn't like his sponsors, and wanting everything to his own way. He competed in the annul Piston Cup race, which, after McQueen refusing numerous times not to get new tires, ended up in a three way tie between him, the present Piston Cup Champion, Mr. The King, and Chick Hicks, another race car.

After being refused by McQueen to take a rest, Lightning's hauler, Mack, drifted off to sleep, and veered to the side of the road. The bumping around opened the door of Mack's trailer, where McQueen was, and Lightning accidentally fell out without Mack noticing. Lighting woke up and raced after Mack, but he followed the wrong truck, and after realizing his error, found out that he was lost. He decided to go to California by himself, and set out.

As he raced along, he came to Radiator Springs, where the local police car, Sheriff, tried to pull him over. Sheriff was an old car, and because he wasn't used to rushing around a lot, given that Radiator Springs was hardly ever visited by anyone, Sheriff got engine trouble. Lightning McQueen thought that Sheriff was shooting at him, so he sped up. He got tangled in the statue of Radiator Spring's founder, Stanly, and pulled in of its base. Then he zoomed away, ripping up Radiator Spring's main road in his wake.

Sheriff eventually caught McQueen, and took him to court, from which he was sentenced to fix the road, thanks to the ex-lawyer Sally. The going was slow, and McQueen hated it, even more so when he heard that Chick Hicks had got to California, beating him. He raced to get the job done, but then had to do it again, this time a better job.

He eventually finished the road, and befriended all of the other cars at Radiator Springs, especially Mater, a rusty old tow truck, whom he became best friends with, and Sally, who became his girlfriend. There was one car, however, who didn't like him: Doc Hudson, who turned out to be the missing racecar champion, the Hudson Hornet. Doc Hudson called Lightning's manager, who came with a whole lot of TV reporters and Mack, and took Lightning to California.

Lightning arrived at the racetrack, and the race begun. But Lightning couldn't concentrate: he was missing the others from Radiator Springs too much. Then Doc Hudson and the gang came to the racetrack and became Lightning's pit crew. Lightning McQueen was winning the race when Chick Hicks intentionally bumped into Mr. The King, making him crash. McQueen saw what had happened, and remembered what had happened to Doc Hudson. Lightning McQueen, to the astonishment of everyone, braked and stopped just before the finish line, letting Chick Hicks win in the process. Then he went and pushed Mr. The King over the finish line, losing the race. But Lightning didn't care: he had learned that winning didn't mean everything.

Lightning McQueen won second to Francesco Bernoulli in the first race of the World Grand Prix because of a communication error with Mater, who unintentionally told him to do the wrong move. Two racecars flamed out in the first race, for some unknown reason. Lightning blamed Mater for his losing, and the two got in a fight, which resulted in Mater leaving.

McQueen and the remainder of his crew then traveled to Italy, where the second race was to take place. First they went to Luigi and Guido's hometown, where he told Luigi's uncle about Mater leaving. Then they went to the racetrack.

The second race of the World Grand Prix resulted in Lightning McQueen winning, followed closely by Francesco. For some strange reason, four racecars flamed out, which resulted in a huge crash. Allinol was blamed for the cars flaming out and cars stopped drinking it. The cars were then allowed to choose their fuel for the next race, and Lightning chose Allinol, saying that his friend Fillmore said that his fuel was safe, and that he hadn't believed a friend lately, and now he was sorry, and he wasn't going to make the same mistake again.

Lightning and his crew then traveled to London, where the last race was to be held. He called Radiator Springs to talk to Mater, but Mater wasn't there. The other cars came from Radiator Springs to London. When McQueen came to the pits during the race, he found Mater there, but Mater drove away from him. Although McQueen didn't know it then, Mater had a bomb strapped to him. McQueen caught up to Mater, but Mater activated some set rockets and a parachute and flew away, Lightning holding on to Mater's tow cable all the time. The two finally landed, and were met by Holley Shiftwell, a British spy, who told McQueen that Mater had bomb strapped to him. British Spy Finn McMissile came with Professor Z, an antagonist lemon car. Mater unintentionally activated the bomb, but then they were surrounded by lots of antagonist lemons who wanted to kill Lightning McQueen and stop cars from using Allinol and every other type of non-oil fuel because they had found the biggest oil reserve in the world and wanted to become rich. The rest of the cars from Radiator Springs then rescued lightning McQueen, Mater, Holley Shiftwell and Finn McMissile. The remaining lemons retreated but were met by Sarge and his British army friends, who captured the remaining lemons.

Mater said that he knew who had strapped the bomb to him, and McQueen and Mater flew off. They landed at the place where the Queen was watching the race, and Mater accused Miles Axlerod of putting the bomb on him. It turned out the Mater was correct, and Miles Axlerod was captured.

Lightning McQueen is now a veteran of the racing world and is challenged by the newer generation of race cars. After suffering a major defeat to newcomer Jackson Storm, McQueen begins reconsidering his career. He trains with Cruz Ramirez in hopes that he can make a comeback. 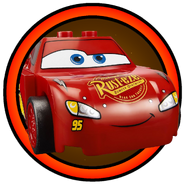