LEGO Dimensions Customs Community
Register
Don't have an account?
Sign In
Advertisement
in: Customs by CJDM1999, Custom Characters by CJDM1999, Legends of Chima,
and 24 more

Prince of the Lion Tribe

Laval is one of the Fun Pack characters in LEGO Dimensions 2: The Rise of Enoch, from the Legends of Chima franchise.

Laval is the son of Lagravis and a prince of the Lion Tribe (and the nephew of Lavertus though Laval didn't meet him until later in his life). He is friends with other tribe members high up in the class system including Eris, Gorzan, Worriz, Skinnet, Rogon, but above all, it was Cragger who was his best friend.

When Cragger discovered the effects of Chi, a rift formed in his and Laval's relationship, to the point where the Lion and Crocodile tribes came to battle. In the climax, the Earth split apart and Cragger's parents, Crominus and Crunket fell beneath. Though they survived, they were presumed dead.

As the new king of the Crocodiles, Cragger was depressed about his parent's death, but did not blame the lions. However, he was hypnotized by his sister Crooler into declaring a full-out war against the Lions. However, Laval and the other lions were unaware of the true reasons behind Cragger's actions, believing that he performed them intentionally.

At Laval's coming of age ceremony where he was to place CHI in his chest for the first time, the Lion CHI Temple was attacked by the Crocodiles and their allies, the Wolves and the Ravens.

Laval chased after their new leader on a Speedor and dueled him, but he stopped after suddenly realizing that he had been battling Cragger. After many battles won for Laval, he spares him, however Cragger takes advantage of this, and he throws Laval into a nearby lake. Laval began to drown, but he was rescued by a Lion Legend Beast, one of the eight animals of great power who never chose to drink CHI and left Chima long ago.

Laval rode the beast back into the battlefield, which the Eagles and Gorillas had now joined, on the side of the Lions. This changed nothing however, as the lions were losing horribly, and when Cragger immediately comes to his senses, Crooler hypnotizes him again. The Beast roared and the fighting stopped as all present bowed down to it, except for Cragger. He plugged an orb of CHI into his chest and charged at the beast, only to be swatted away. Using the orb of CHI that Cragger dropped, Laval was able to defeat the Crocodile King and told Cragger to tell his troops to retreat. Despite all that has happened, Laval still felt bad for Cragger.

Laval is skilled in Speedorz tournaments and is also expected to be a warrior on the battlefield, but he is immature and would he would rather play. Razar describes him as a "goody two-paws."

Unlike the other characters, who use powerful, large vehicles for transportation, Laval only uses his Speedor, even during wars.

He had a fear of water and swimming as he is a cat. He got over this fear when he remembers Cragger's advice about friendship: "Friendship only pulls you down when you fight it, it won't when you let it float you where you want to go." A brief moment after, Laval swims and rescues the Lion Legend, thus removing Laval's phobia. 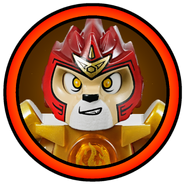