"I'll show you the Dark Side."

Kylo Ren is one of the Fun Pack characters in LEGO Dimensions 2: The Rise of Enoch, from the Star Wars franchise.

Kylo Ren was born Ben Solo, the child of Han Solo and Leia Organa. After demonstrating use of the Force, he was trained by his uncle Luke Skywalker, the last Jedi. During his training, however, he was seduced to the dark side of the Force by the mysterious Supreme Leader Snoke, and wiped out Luke's new Jedi Order. Years later, he was the new face of the First Order, a new superpower risen from the ruins of the Galactic Empire.

Idolizing his grandfather Darth Vader, he renamed himself Kylo Ren. While trying to capture BB-8, a droid with a portion of the map to the exiled Luke Skywalker, he encountered and burned the village of Lor San Tekka and captured Resistance fighter Poe Dameron, who later escaped. Later, he captured the scavenger Rey; however, she soon escaped using her newfound Force abilities.

After killing his father at Starkiller Base and defeating ex-stormtrooper Finn, he was attacked by Rey, who was able to incapacitate him. He was then rescued by General Hux on Snoke's orders. Following the battle, Kylo begins to feel used by Snoke and attacks the escaping Resistance fleet in his TIE silencer. He and Rey communicate through the Force telling her he killed Han because he wanted to let go of the past. When Rey comes aboard the Mega-class Star Dreadnought Supremacy, Kylo brings her to Snoke.

After Snoke claimed to be responsible for the connection between him and Rey in order to find Luke and used them both, Kylo kills him and with the help from Rey kills Snoke's guards. When Kylo proposes that they rule the galaxy together and Rey refusing, the two battle each other with them breaking Anakin's lightsaber.

In the aftermath, Kylo takes control of the First Order and manages to get the Resistance cornered. When the unexpectant appearance of Luke comes. Kylo faces his uncle and fights him only to find out he was fighting a Force projection of him that was distracting him while the Resistance escapes. He and Rey then have one last look before she leaves with the Resistance.

Kylo Ren searches for a Sith wayfinder to lead him to the Sith planet Exegol, with the hopes of killing the resurrected Darth Sidious as a show of his power. When Ren finds the wayfinder and arrives on Exegol in his TIE Whisper, Sidious reveals that he has been manipulating Ren and the First Order, having created Snoke as a means of turning Ren to the dark side.

Sidious unveils the Final Order, a massive armada of Xyston-class Star Destroyers designed by the Sith Eternal. Sidious offers the Sith fleet to Ren in a bid to form a new Sith Empire—with Ren as Emperor—on the condition that he kill Rey. Ren searches the galaxy for Rey and continues corresponding with her through the Force to discern her location. Rey has been searching for a second wayfinder; Ren tries to stop her from finding it.

Eventually, Ren informs Rey that she is Sidious' granddaughter, and furthermore, they are a dyad in the Force with extremely powerful potential when joined together. He urges her once more to take his hand and to overthrow Sidious together. Rey refuses, but Ren is unwilling to kill her and follows her to Kef Bir, the location of the second wayfinder.

Meeting her on the wreckage of the second Death Star, Ren destroys Rey's Wayfinder and duels her. The duel ends with Rey impaling Ren, who had been distracted by his dying mother, Leia, reaching out to him through the Force. A guilt-ridden Rey (also sensing Leia's death) uses the Force to heal Ren and leaves aboard his ship, after telling him that she wanted to take Ben Solo's hand, but not Kylo Ren's. Alone on the wreckage, Ren converses with a memory of his father, Han Solo; he throws away his lightsaber, renouncing his role as Supreme Leader and reclaiming his old identity of Ben Solo.

Ben rushes to help Rey defeat Sidious on Exegol. Rey senses his presence and uses their Force connection to give him Anakin's lightsaber, which Ben uses to defeat the Knights of Ren. Sidious then senses Rey and Ben's connection as a dyad of the Force, and absorbs their energy to restore his full power, before casting Ben into an abyss. However, Rey manages to defeat and kill Sidious before dying from the effort.

Ben climbs out of the abyss and finds Rey's inert body. Ben manages to transfer all of his life essence into her, successfully resuscitating her but sacrificing his own life in the process. They share a passionate kiss before Ben dies peacefully in Rey's arms. His body fades away, simultaneously as his mother's body becomes one with the Force. 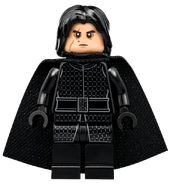 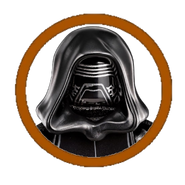 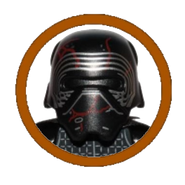 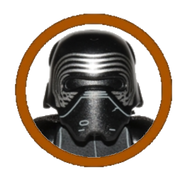 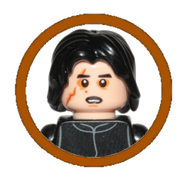 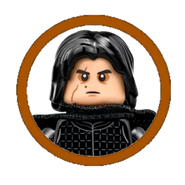