LEGO Dimensions Customs Community
Register
Don't have an account?
Sign In
Advertisement
in: Customs by CJDM1999, Custom Characters by CJDM1999, The Simpsons,
and 22 more

Krusty the Clown is one of the Fun Pack characters in LEGO Dimensions 2: The Rise of Enoch, from the Simpsons franchise.

Born as Herschel Shmoikel Pinchas Yerucham Krustofsky, Krusty the Clown is a hard-living entertainment veteran who has been down and out several times (always being rescued by the Simpson children) and remains addicted to cigarettes and alcohol (and, in two episodes, Percodan). He seems to suffer from bipolar disorder and in a Soupy Sales parody, asked children to send him spare lithium from their parents' medicine cabinets after the nuclear channel 6 cut off its prescription drug plan. He says that his tolerance levels are so high from years of excess he has to smoke ground-up "moon rocks" to get normal. Krusty – minus his trademark clown-hair, pale "facepaint" and red nose – bears an uncanny physical resemblance to Homer Simpson. However, there also differences such as his cow-skull birthmark, his superfluous third nipple, and his small feet. Krusty, like Homer, has apparently faced heart problems in the past as he currently has a pacemaker. The pacemaker has since permanently made his face white. He also seems to be disturbed at even the mere mention of someone having an affair, as when Homer tells Krusty the Clown that Apu was cheating on Manjula (due to his thinking he'd joke about it), he reacted quite opposite of what Homer expected by saying in a remorseful tone that it was sad, and feeling sorry for all of their kids. Krusty lives in his mansion in the upscale residential area of "Springfield Heights", which is also resided by mob don "Fat" Tony D'Amico and actor Troy McClure, though at one time lived in the suburbs at 534 Center Street. Still, Krusty is involved in some business. Many say the characters main inspiration is Rusty Nails, a television clown Matt Groening (the creator of The Simpsons) watched as a child.

He was seen amongst the chaos in the Springfield invasion, carrying a briefcase full of money while trying to escape from Micro Managers. He then found Marge, who was taking care of Grampa. After knocking him over, Krusty offered her money from the briefcase. He was then thrown into the air, crossing Batman, Gandalf, and Wyldstyle's paths. 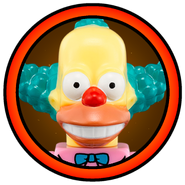