Koopa the Quick is one of the Blind Bag characters in LEGO Dimensions 2: The Rise of Enoch, from the Super Mario franchise.

Koopa the Quick is a large Koopa Troopa that Mario can race twice for Power Stars in Super Mario 64 and the remake. He is one of the competitor characters in the game along with the Big Penguin. According to what he says, his home is the "huge" variation of Tiny-Huge Island, which explains his size. 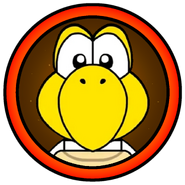