Troopers in the Koopa Troop

Koopa Paratroopas are one of the playable in-game characters in LEGO Dimensions 2: The Rise of Enoch, from the Super Mario franchise.

Koopa Paratroopa (frequently abbreviated to Paratroopa) is a recurring enemy in the Super Mario video game series. It is a Koopa Troopa with wings on it. However, they will fail to retain them if someone decides to jump on them. He appears as playable characters in Mario Kart: Double Dash!! and Mario Power Tennis for the Nintendo GameCube. 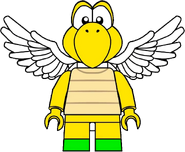 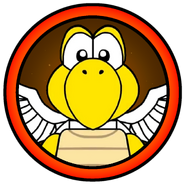