LEGO Dimensions Customs Community
Register
Don't have an account?
Sign In
Advertisement
in: Customs by CJDM1999, Custom Characters by CJDM1999, Youtubers,
and 21 more

JonTron is one of the Blind Bag characters in LEGO Dimensions 2: The Rise of Enoch, from the JonTronShow franchise.

Jonathan Aryan Jafari is a YouTuber and internet celebrity who is colloquially known for reviewing mostly terrible video games and movies (sometimes good) on his channel, JonTronShow.

He started making videos for screwattack.com in 2010, where he met with Austin Hargrave (PeanutButterGamer), and they started Normal Boots together, where a group of people could show off their own content in one place.

In 2012 he started a gaming channel called Game Grumps with animator and voice-actor, Egoraptor, where he used to play games whilst telling stories and generally commenting on the gameplay, serving as "Not-So-Grump". Around a year later, he left the show because he was moving to New York and wanted to focus more on his own channel.

He has had several pets over the course of his lifetime. He formerly owned a bird prior to the show that had passed away, with his green-cheek conure and series mascot, Jacques, serving to fill the void. Later on, Jon had also acquired a female green-cheek, named Cinnamon, a briefly-owned sun conure named Spaghetti, and possibly also owns a Siberian cat of some sort, which was briefly seen in Waterproofing My Life With FLEX TAPE. The cat's name is unknown.

On October 23rd 2019, he married his long-time girlfriend, Charlotte Claw. 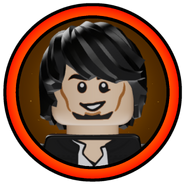