Ice Bros. are one of the playable in-game characters in LEGO Dimensions 2: The Rise of Enoch, from the Super Mario franchise.

Ice Bros. are a sub-species of Koopa Troopa that debuted in New Super Mario Bros. Wii. They are very similar to Hammer Bros., except that they are cyan colored and that they throw ice balls instead of the usual hammers. Ice Bros. are the exact opposite of the Fire Bros., when the player touches one of their icy projectiles, he is injured and frozen in an ice block. In New Super Mario Bros. Wii, the player has to shake the Wii remote to break free. 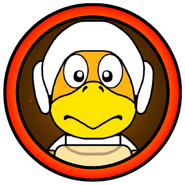