"With a bit of string and polyester, our lovable, blue pal Huggy was brought to life! Huggy Wuggy has gone on to be Playtime Co.'s most popular and best selling toy so far!"

Huggy Wuggy is one of the Blind Bag characters in LEGO Dimensions 2: The Rise of Enoch, from the Poppy Playtime franchise.

Huggy Wuggy was created in 1984 by Playtime Co., in which he became a roaring success and became one of the many signature toys in Playtime Co. A feminine counterpart was created a year after Huggy's creation.

During an unknown date in time, In an effort to create the perfect living toy, Playtime Co. conducted numerous unethical and highly illegal experiments, one such example being Huggy Wuggy. Despite being created for the purpose of becoming a child-friendly mascot and being a prototype, Huggy went rampant. During his murderous rampage, Huggy killed many of the scientists and workers of the facility he was kept in. Huggy would go on to remain in the abandoned facility for decades until the eventual return of The Player.

Huggy is first seen standing in his statue form by the player in an exhibition hall. When the player's back is turned, Huggy will hold a key on his right arm but remain motionless. After taking the key and turning the power back on in the Innovation Wing, the player returns to the exhibition hall only to find that Huggy has now disappeared.

Huggy goes on to stalk the player as they make their way through the facility. After the player manages to turn back on the toy-making machines and bypasses a door system using a toy made from the machines, Huggy reveals himself. Following the player into the facility's ventilation system, an intense chase ensues as Huggy attempts to catch and devour the player. After managing to momentarily escape Huggy and landing on a brittle catwalk, the player pulls a crate onto the crumbling structure just as Huggy bursts from the vents, causing it to collapse. Though the player manages to land safely on another catwalk not far below, Huggy strikes the railing and proceeds to fall into the abyss on the facility, slamming into several pipelines and leaving behind dark red blood splatters.

Chapter 2: Fly in the Web

Huggy does not make an appearance in this chapter, but is instead mentioned in the second tape discussing Experiment 1-0-0-6, in which he was confirmed to be a different entity, as he went with the alias Experiment 1-1-7-0 instead. He also is presumed to make a comeback, as inside the Water Treatment zone, a vent surrounded in blood and blue fur can be seen around a specific room.

Original minifigure picture in the Infobox is created by Eli 138 Productions on YouTube. 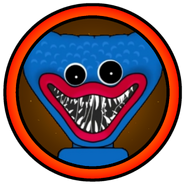