"World's greatest marksman, at your service."

"Everyone relaxed! I'm here to save the world. Again."

Hawkeye is a playable character in LEGO Dimensions: The Multiverse Curse, from the Marvel Comics franchise. 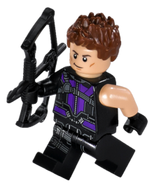